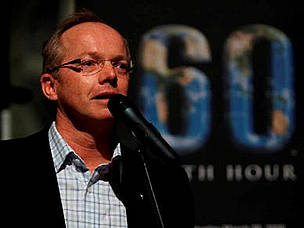 Robert Purves AM, President of WWF-Australia and Earth Hour Board Member since December 2012, has been announced as this year’s recipient of the Australian Geographic Society’s Lifetime of Conservation Award.This award is one of the Society's highest honours, recognising those Australians who not only have a lifelong commitment to their chosen field but who have given back to the nation and who have inspired countless other Australians.

The Sydney-born businessman is the President of WWF-Australia, a former board member of WWF International, a founding member of the Wentworth Group of Concerned Scientists, and also holds leadership positions with many other environmental causes. His philanthropic work through the Purves Environmental Fund has been instrumental to many of the major achievements on the conservation front in Australia, including the landmark Murray-Darling reforms, stopping broad-acre landclearing in Queensland and saving the Tarkine from wholesale destruction.

Upon learning of his award, Mr Purves said he was humbled to receive it. “Like Australian Geographic and its thousands of readers, I too am passionate about our beautiful landscapes,” Mr Purves said. “It is our experience of, and relationship with, these wonderful landscapes and biodiversity that helps makes us uniquely Australian. One of the wonderful things of working in the field of conservation has been the people I’ve met and the friendships I’ve made along the way. These are passionate and talented Australians trying to make a real difference – giving me a real sense of hope for the future. Yes there are increasing pressures on our natural world, but I am convinced we can get this balance right and truly live in harmony with nature.”

About Robert Purves AM:
A Sydney-born businessman and a dedicated environmentalist, Robert is currently the President of WWF-Australia and is a former board member of WWF International (the world’s largest science based conservation organisation). Robert is also a founding member of The Wentworth Group of Concerned Scientists, a Director of Earth Hour Global, a Director of Climate Council of Australia, a Patron of the Lizard Island Research Station, and a Governor of the Australian Youth Climate Coalition. In 2004 Robert established the Purves Environmental Fund, whose core objectives are to support advocacy and education on climate change and landscape management, and to improve environmental policy through the use of science, as well as to strengthen targeted NGOs through capacity building. In addition, Robert has had a long career in business including being the Chairman of a publicly-listed company, DCA Group Limited, the then leading provider of radiology and the largest private operator in aged care in Australia. In 2008 Robert was appointed a Member of the Order of Australia (AM) for service to conservation and the environment, and awarded an Honorary Fellow from the University of Sydney. Robert lives between Sydney and his farm in Bungendore, NSW.