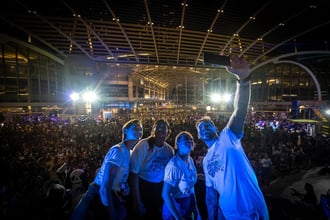 On 28 March, as I take my place amongst millions of people around the globe to celebrate Earth Hour, I am reminded again of what it has achieved since its inception and I am in awe of the strong power of people!

Of all the global movements, Earth Hour stands out for making the seemingly impossible a reality. Earth Hour has, among other successes, called for new legislation for protection of forests in Russia, mobilized public support for the creation of a 3.5 million hectare marine-protected area in Argentina, planted 17 million trees in Kazakhstan and advocated for a ban for the use of plastic in Ecuador. (Photo: © WWF-Singapore)

2020: a critical year to move decision-makers 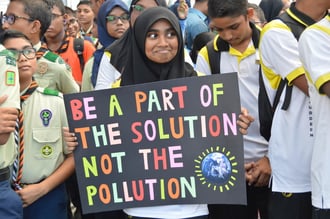 Now the need is stronger than ever! Global biodiversity is declining at an unprecedented and alarming rate and the planet is on the brink of runaway global warming. The science has never been so clear - in 2019, the report by scientists at IPBES, an Intergovernmental Platform of experts assessing biodiversity threats, showed that one million plants and animal species are currently threatened with extinction and (on average) more than 25 percent of documented species are under threat. This dire reality demands robust global action in order to secure a sustainable future for people and the planet.   (Photo: © Ahmed Nasheed /Earth Hour - Maldives)

This has been said, over and over, for many years, in one form or another. So why is this year different? Well, 2020 provides us with a unique opportunity, which we must grab hold of and not let go. In this historic year, world leaders will come together at Forums such as the Convention on Biodiversity, UN Climate Change Conference and UN General Assembly to make critical decisions on the environment, on behalf of all of us. These decisions will set the agenda for the next decade and for our future, which is why we must speak up, louder than ever. It is essential to put nature at the core of the decisions to stop increasingly rapid nature loss, environmental decline, and safeguard all our futures.

The next generation must speak up for their future 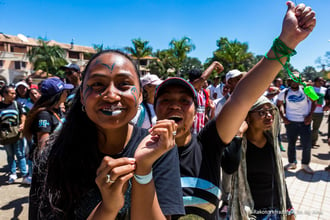 2020 must therefore become the ‘year of global action’ on all levels. While world leaders make important decisions at global fora, the people on the street, in particular the young people whose future depends on securing action at these meetings, must influence and support them. Movements such as Earth Hour play a pivotal role. They hold the key to show world leaders, corporates and other decision-makers around the world that action needs to be taken now!  (Photo: © WWF-Madagascar)

When I was a student, I remember the strong power of our environmental movement to fight against water, air pollution, acid rain and habitat destruction of wild species through land-use change in Germany. I, and other young people, challenged decision-makers and advocated for change leading to new laws to protect the environment.

Now we are facing global issues which need united global actions of the world’s citizens and I strongly believe it is the power and pressure of the youth that will once again initiate the winds of change. I am deeply impressed that many young people are invested in their future, and that of the environment they will inherit, live in, and rely upon.

Through global climate marches and events, transcending time zones and cultures, youth movements such as Earth Hour and Fridays for the Future have managed to bring the world together to demand urgent climate and nature action. With a loud, clear and challenging message, young people in particular have demanded that we all act like the house is on fire — because it is. Their voices are now resonating in the negotiation rooms of global conferences such as the UN General Assembly and World Economic Forum and playing a significant role in environmental decision-making.

I am very proud to see the youth challenging world leaders and driving momentum. After a long career as an environmentalist, I feel hopeful in passing on the baton to the next generation.

The planet is in our hands, pledge your support!

For Earth Hour 2020, I call upon every person, especially the youth to join us as we push for global changes necessary to save our natural environment. We need to reach world leaders more than ever, helping them understand that nature is not only the critical foundation of a healthy planet, but the life support system for humankind too. Preserving nature is crucial for every living being, and giving up is not an option. We can and must secure a future worth having for the planet and its inhabitants; we have taken nature for granted for too long. 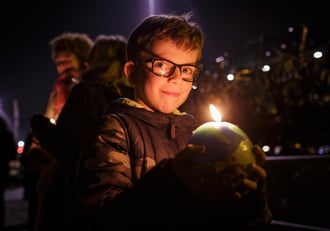 Earth Hour is one of the key moments in 2020; we can come together to create the momentum critically needed to put pressure on the world stage. You can make a huge difference by supporting your local Earth Hour event, sharing stories of why nature matters to you, trying to make lifestyle changes - or simply learning more about why climate change and nature loss are the two biggest environmental issues facing our planet. (Photo: © WWF-Netherlands )

I invite you to stand in solidarity with us and pledge your support online at Voice for the Planet. The signatures collected on Voice for the Planet will be used in our conversations with governments, the private sector, and multilaterals at all key fora and events in 2020. They will show decision-makers the groundswell and widespread, popular support to make nature really matter.

We can change hearts and minds if we all stand together. I witnessed change for a better environment in my youth. We can do it again.

Join us at Earth Hour 2020 and be a part of shaping history - and our future.