Conserving the ocean of life. 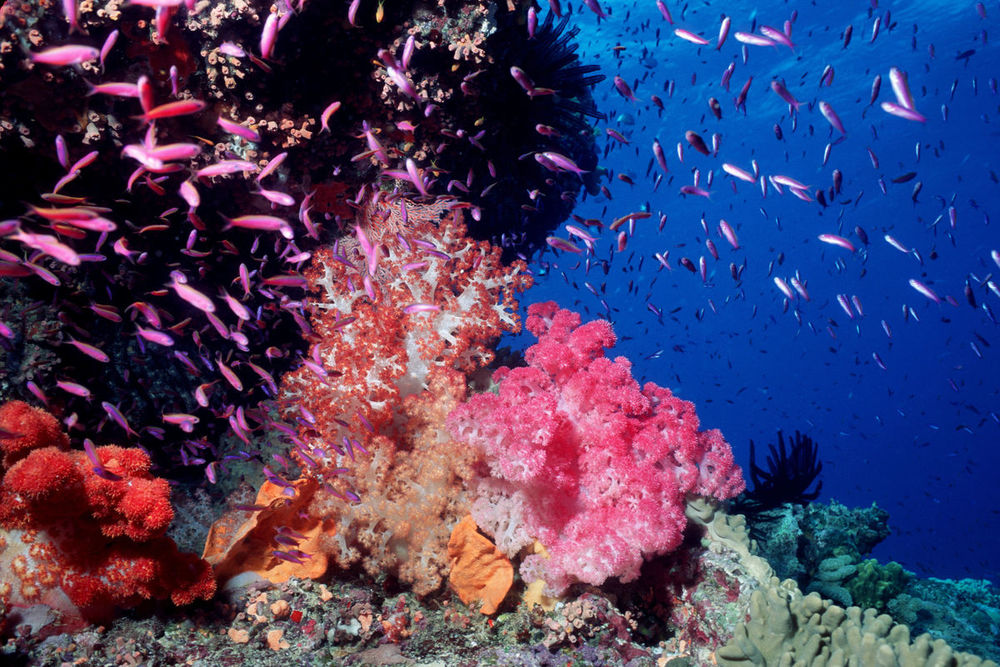 Our oceans provide a vital source of food and resources for people, underpinning trillions of dollars of economic activity worldwide! Incredible, isn’t it?

However, the ocean is facing increasing amounts of stress, resulting in widespread damage, like the bleaching of coral reefs species :( Here’s why that’s happening - when the ocean becomes too warm, corals can expel the algae which lives on them, thus losing their primary food source. This causes them to turn pale or completely white. Corals don’t always die after a bleaching episode. If heat conditions decrease, they may be able to recover! But if the heat remains, it stresses them and makes them more prone to disease, reducing their chances of survival.

A proportion of corals can die each time there is an El Nino event, which naturally causes parts of the ocean to warm. However, global warming has dramatically worsened the problem, and higher temperatures are leading to corals being bleached at unprecedented rates. Large sections of the Great Barrier Reef died from mass bleaching in 2016 and 2017, as did big areas of reefs around the world. When corals die, many other animals which rely on the corals for shelter and food can also perish or undergo great stress.

This throws off the delicate balance of the marine ecosystem. And that’s not all!  A major part of the biodiversity of our oceans is now at risk - more than a quarter of marine life relies on coral reefs for some part of their life cycle. Many of us will feel the consequences as well. Fish play an important part in many people’s diets, and many people who live in coastal settlements rely heavily on fishing for food and income, with fisheries supporting the livelihoods of an estimated 10-12% of the global population. For many of these people, if there were no fisheries it would be really hard to find other forms of work and livelihoods!

Products and services derived from the ocean are worth at least $2.5 trillion dollars every year :o Corals are a key part the ‘ocean economy’ and also provide important sources of revenue, being popular attractions for tourists, so the death of coral reefs could lead to serious economic stress, especially in poorer countries which rely heavily on fishing and tourism to sustain themselves.

On top of all that, coral reefs also act as buffers against waves and storms. The physical barrier they provide causes waves to break offshore, reducing their destructive energy. This helps to prevent and reduce the loss of life and property as well as slow the erosion of beaches. When coral reefs are destroyed, coastal communities may face even greater trouble in times of natural disaster. The protective role of coral reefs will only become more important as sea levels rise and storms become more intense.

But it is still possible to make a difference. Here are a few steps you can take to help change climate change, and protect our planet’s incredible nature!

1. Try switching to renewable sources of energy. This helps ease global warming and is a step towards saving our oceans and corals!

2. Recycle where possible. Recycling reduces the need for new resources and cuts down the amount of trash that is thrown into the ocean!

3. Watch what you eat and demand sustainable seafood so that they will still be around for years to come!

4. Use only what you need. Energy is a precious resource, and if you watch what you use carefully, you’ll help do your part for our planet!

One more way you can show your support for our planet is to join the Earth Hour Facebook event! Earth Hour 2018 is taking place on Saturday 24 March at 8.30pm local time. Participating in our Facebook event shows your interest and support for Earth Hour and rallies even more people to take part. Turn off the lights for an hour (or more if you want!) to have fun and help save the planet! :)